I'm at band camp this week, so there will be no art going on... it started on Saturday, and it's been going 9am-9pm ever since... only 2.5 more days... that's what I keep telling myself. Everything hurts... especially my feet and knees. And my hip. And one of my shins. And the muscles behind my knees. And my lower back. And my arms. And the inside of my lip from playing sax.

To keep this post relevant, here's a drawing I did many many moons ago (2007) called 'The Band Camp Tan.' It's four years old and you can definitely tell, but it still remains one of my most popular pieces on deviantART; people really seem to relate to it! I get a lot of comments along the lines of 'OH MY GOD THIS IS SO TRUE'. Anyway. We were outside for rehearsal on Saturday in the hot sun (normally we practice in the Dome, but we couldn't be in there because of the football team. What they were doing on our field, I don't know) and I've got some of this going on:

So yeah. I've especially got the shorts and socks tan, with a little bit of the watch tan, although mine is more of a bracelet tan.

Back to the grind tomorrow... another 12 hour day of marching, setting drill, learning music, and running at a high step from endzone to endzone over and over again (aka the 'fun run'. It is not fun.)

-Anna
Posted by Anna Rettberg at 10:51 PM No comments: 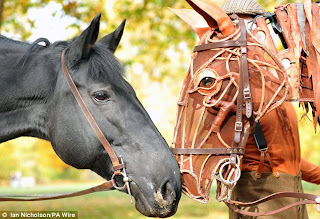 Yesterday I was in New York City, where I saw the play War Horse at Lincoln Center. From the moment I saw the amazing puppet for the horse Joey (above) on TV at the Tony's, I knew I had to see this play. It takes three people to operate the puppet. One person for the head, another for the 'heart', and a third for the 'hind'. I did a doodle which shows how it works. Sorta. 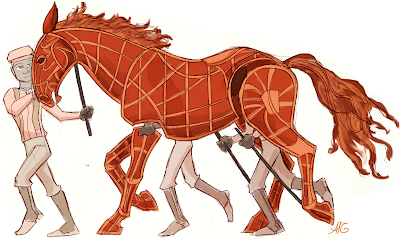 While I felt that the play wasn't as emotionally satisfying as I was expecting (all the hype about people crying and such might have made me put too many expectations in it but... alas), I still really enjoyed the spectacle. The horses stole the show anyway. I also loved the music, which was made up of a lot of beautiful English folk music, which I'm a massive sucker for. Anyway, I definitely recommend seeing it if you get the chance. Or if you can't see the play, check out the movie version coming out around Christmas... it's directed by Steven Spielberg and John Williams is doing the music. Can't get much better than that, am I right??

I also love people watching in New York. There are so many different characters. I love thinking about how each person I see has their own life that's just as important to them as mine is to me, and even though I will never see them again, they will go on doing what they do. Here are a few of the people that I saw: 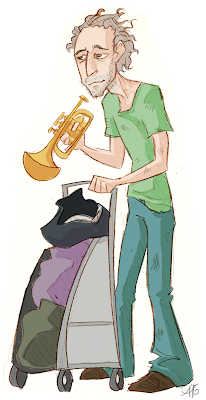 There was a guy playing a steel drum in the subway, and this homeless-looking man rolled up to him and pulled out his trumpet. He was trying to figure out what key the steel drum was in. Then he got on the subway car that we were in, and when a mariachi band came onboard at the next stop and started playing (which was really random, and really amusing), he once again pulled out his trumpet and played a few notes (not very well). When the train stopped, he followed them out of the car, and as we pulled away I saw that he was talking to the mariachi band... so yeah. That's that guy.

This guy was on the same subway car as the mariachi band/homeless trumpet guy. At first I noticed him because I thought he was looking at me, but then again when you're wearing sunglasses you could really be looking at anybody. He was amusing because he looked like a mix between a hipster and a brah, and it confused me.

I saw this woman while walking in Manhattan. She was wearing a shirt that I'm pretty sure was intended to be worn with some sort of pants. Just sayin'.

This woman was in the theatre at Lincoln Center. Her weird, fancy onesie needed more of a back. And when she sat down, her spine stuck out like a dinosaur's. Creepy. 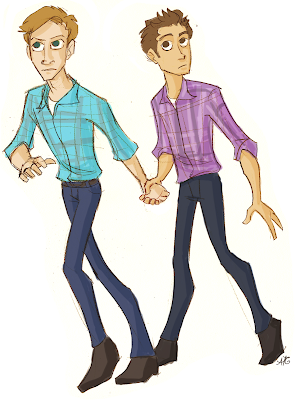 When I saw these two, I wondered who they were, and how they met, if they had planned on wearing similar outfits or it just sort of happened, and where they were going in such a hurry.

Anyway, those are just a few of many fun people I saw. Good times! I miss the city... can't wait to go back! My brother lives in Astoria, Queens, and it was fun to visit him too.

-Anna
Posted by Anna Rettberg at 9:21 PM No comments:

So Saturday night my friends and I drove down to Allentown to see the DCI show. For the uninitiated, DCI is Drum Corps International, and it's basically marching band on steroids. It's awesome. Anyway, I was looking through my sketchbook from last summer, and I found these doodles of three different corps uniforms. Carolina Crown, The Cavaliers, and The Cadets: 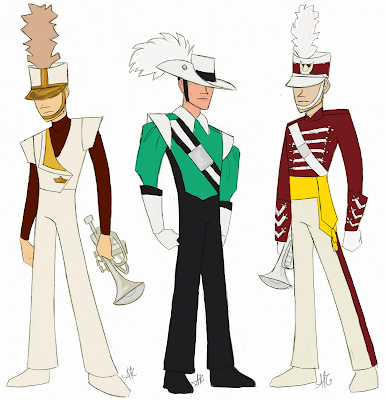 Some of the uniforms (particularly Crown's) have changed this year, but I figured I'd post the old ones anyway. Whee! I've always thought marching band uniforms are really cool, and I like the direction that they're going in these days. Much more sleek and streamlined, and lets be honest, totally badass.
For a taste of drum corps, here's a video of The Cadets playing Don't Stop Believing:
Anyway. Here are some other doodles I found while looking through my old sketchbook. Last summer wasn't very good. I wasn't in a good mental place-- I was still recovering from a panic attack I had in the Spring, and I had a horrible semester because the two sophomore illustration professors decided it would be a good idea to go on sabbatical at the same time, and screw all their students over. So because of all this, I was very uninspired, but looking back I felt like I did make some good art! Here is a little of it: 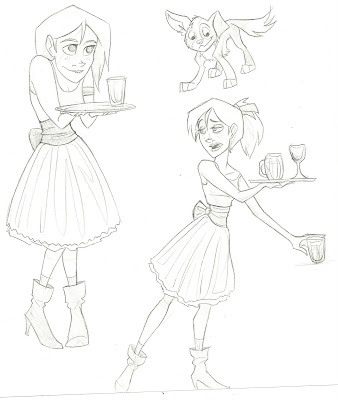 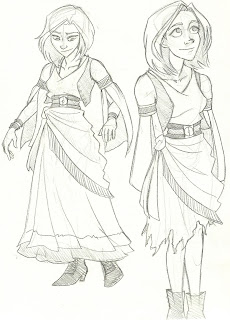 A girl from a story I wrote when I was 12. Story was crap, but I still love the character: 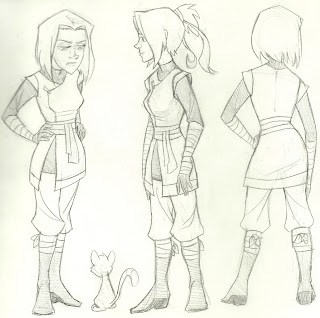 A girl lying in some grass:

A girl you don't want to mess with:

I think this is supposed to be Katniss from The Hunger Games: 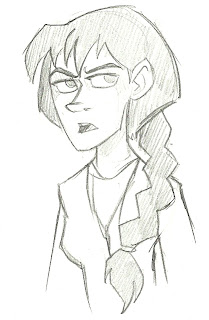 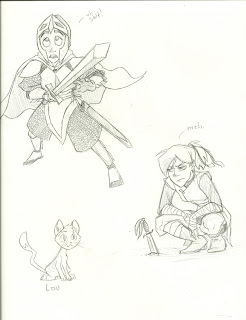 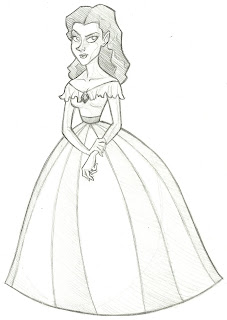 -Anna
Posted by Anna Rettberg at 7:42 PM No comments: