Pride and Prejudice and Zombies

"It is a truth universally acknowledged that a zombie in possession of brains must be in want of more brains."

For Concepts this week we had to pick a crappy illustration and make our own (better) version. It just happened that for my Jane Austen class we had to read a little bit of 'Pride and Prejudice and Zombies', which is a silly novel full of crappy illustrations! I was disappointed to see how such a ridiculous concept could prompt such lame illustrations, so I decided to do my own! Darcy and Lizzy, kicking some undead ass. 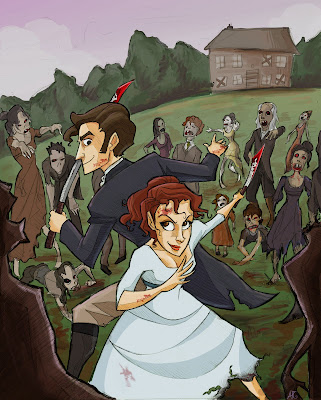 Here's one of the original illustrations:

So for Concepts we had to pick an article and illustrate it. I had a really hard time finding an article I liked (partly because I'm not really good at the whole article illustrating thing, and partly because everything in the news is SO FREAKING DEPRESSING). I managed to find an article in the Guardian (UK newspaper) about the royal wedding, and how all little girls want to be princesses. I'm not sure how well this illustration carries out that whole idea, but I think it works with the article.
I'm a little meh about the Union Jack collage in the shadow/silhouette of Kate Middleton, I might play around with it a little more, but this is what I've got for now.

UPDATE: Just had a critique. Our instructor for this assigment is the Art Director for the Business section of the NYTimes, and he said that it illustrated the point perfectly and if he had gotten it for a NYTimes article he would have run it... sweet! 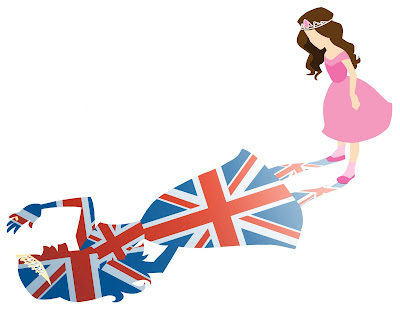 Our new instructor for Concepts is the Art Director for the Business section of the NYTimes, and he gave each of us a different article to illustrate. Mine was about how Facebook is basically taking over the world, and Google no likey. 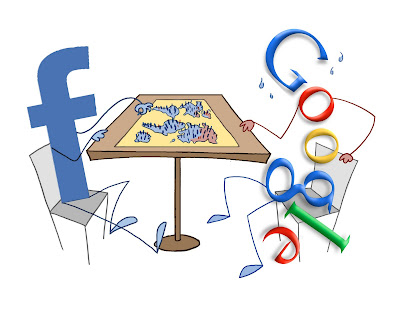 The other week I received one of the best compliments I've ever been given. I had written a paper for my Jane Austen class, and was nervous about getting it back. I'm a good writer, but my professor is intimidatingly intelligent and I had no idea how he was going to grade. When I got the paper back I was relieved to see I had gotten an A, but that wasn't what stood out to me. On the back he had attached an entire page of thoughtful comments on my essay, and it was one of those comments that I couldn't believe. He compared me to Jane Austen. It was just a little note, saying that I, like Austen, am observant to nuance and detail. I know it was just a little observation, but that I could be compared to a woman as clever and witty as Austen by one of the most intelligent people I have ever met is something I will never forget.

I tend to draw a lot of strong women characters. I know I keep talking about Buffy (and I promise I will stop soon!), but the show just got me thinking about strong female characters, and why there are so few of them in film and TV. Even Pixar, my favorite animation studio, has NEVER had a female main character, which is ridiculous! (Although, they are changing that with Brave, which will be their first fairy tale and female lead).

There are very few fictional women who I can say I admire, and Buffy is the one that stands out to me the most. The only other show I can think of with female characters that compare is actually a cartoon! Avatar: The Last Airbender has some pretty incredibly women... Katara, anyone? And Azula. And Toph. And Suki. And many more! And I know there are other shows are out there that depict strong women, but it's nowhere close to where it should be in today's society.

There are so many things about Buffy that I love. One of the most beautiful relationships on the show is between two women, Willow and Tara. I can't think of another show that presents it's characters with such respect, and effortlessly encourages open-mindedness in it's viewers. And I think it's the end of the show that really got my thinking. I don't want to spoil anything, but it really made me, as a woman, feel powerful. I didn't know that a show could reach out and make me feel a certain way about myself. I feel for the characters, sure, but for myself? I don't think that's ever happened to me before- I don't think a piece of fiction has ever left me, personally, feeling empowered.

I mean, take Twilight, for example. I don't think Twilight would bother me so much if it weren't read by so many girls. I won't deny that I read the series, and even enjoyed it (at least the first book), but to think that an entire generation of young women is viewing Bella Swan as some sort of role model is truly discouraging. Bella is weak; a damsel in distress, who won't allow herself to function without Edward. Buffy, who has a very similar (and frankly, more compelling) relationship with the vampire Angel, deals with the same circumstances in a much different way.

I guess what I'm trying to say is that I wish when young girls found themselves in difficult situations, they wouldn't ask themselves "What would Bella do?", but "What would Buffy do?"

All of this has just been on my mind lately, kind of floating around. Art and writing are both a huge part of who I am, and I figured that it might have a place here on my blog too. I'm an analytical person. I would love to write an essay comparing Buffy and Bella, I think the whole thing is really interesting. And it's also interesting that Twilight was written by a (Mormon) woman, and Buffy created by a (feminist) man, Joss Whedon... but I wont even start on that one.

Anyway, that's just a little ramble from me. Goodnight, world! 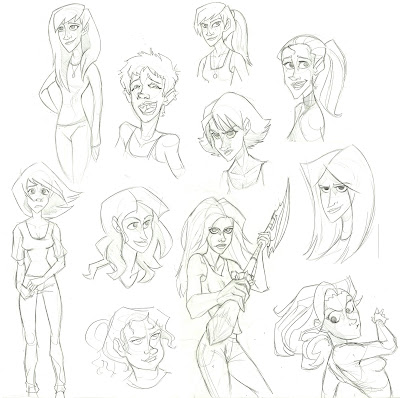 For Yvonne's class, we are making an animation based on an overheard conversation (even though I was actually part of the conversation I ended up using... whoops). My roommates and I were talking about all the weird sounds we always hear in the dorm, and what is making them. Our conclusion: Monsters!

I don't see how we're going to have time to make an animation with only a few weeks left in the semester, but we'll see. In the meantime, here are some of my concept sketches for the three of us and the monsters. 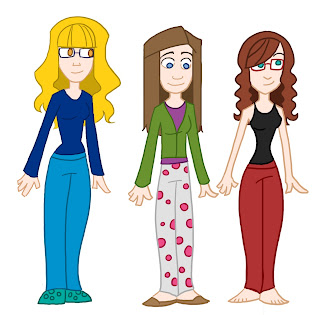 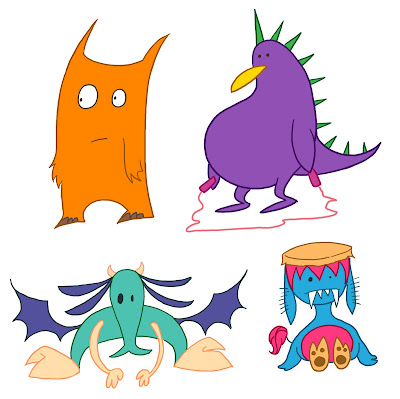 Also, earlier for the same class we had to make an 'snowy' environment and put a creature in it, so this is what I did for that: 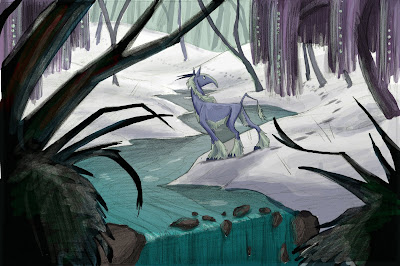 Here are the final drawings for my Stardust pieces... I might tweak the drawings a bit, and then I'm going to try to paint them! We'll see what happens... 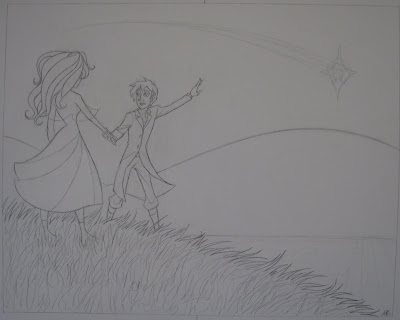 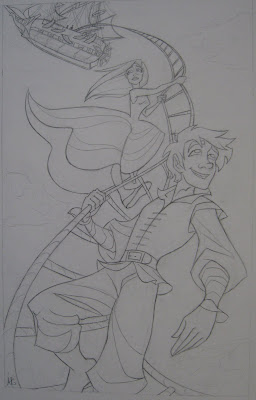 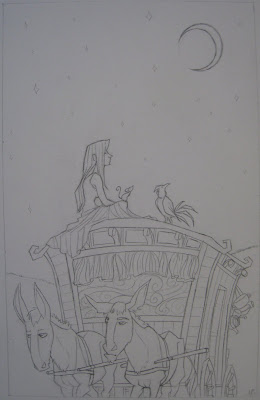 I wanted to do something Buffy-related, because I only have three episodes left to watch in the series. This is from the episode "The Gift", and it's one of the most powerful moments in the entire series. I still get kind of emotional when I watch this scene/listen to the music from it. I thought it would be a good experiment with lighting and color too, which are two things I'm trying to get better with. 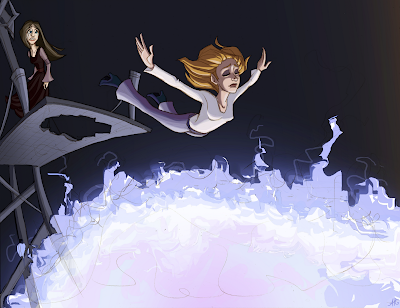 And once I start, I can't stop! I did this one a little while ago (before England), because I thought the moment was really funny... it's from the episode Tabula Rasa, where where all the characters forget who they are. (If you can't tell, I love doing caricaturessss). 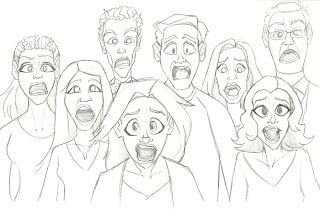 An assignment for Brian Ajhar's section of Concepts. The assignment was to make a totem pole... I decided to stack a bunch of animals reaching for an apple. This turned out to be kind of an experiment. It's a mix between traditional (colored pencil) and digital... I don't know why I chose colored pencil, because I've never worked in it before, but why not, right? 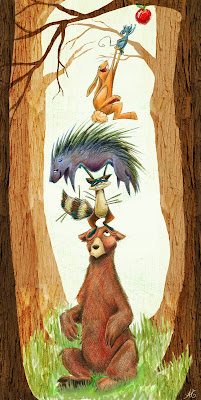